The Unit market is BOOMING. Haven’t you heard?

Home/Blog/The Unit market is BOOMING. Haven’t you heard?
Previous Next

The Unit market is BOOMING. Haven’t you heard?

Units as houses are real estate products that eventually will go up in value over the years for all the patient investors; however, it is still crawling after the houses market.

Units can be a good investment, but you need to know where to invest, location, number of bedrooms, bath and car parks, layout, and building size. Not all the apartments will be a wise investment, especially in the oversupply locations.

I decided to write this content as I observed a lot of unit sales advertisements with the obvious incentives, and the ridiculous one is promoting the next unit Boom. “Houses have done their thing, and now it’s the units turn to shine“.

I have to ruin for some of you; there won’t be a boom in the apartments market as it’s only marketing propaganda to sell more and justify apartment selling across Australia. However, only selected units’ type will show good capital appreciation, and rent is rising as well, which is good to keep the cash flow positive after mortgage payments. But again, it’s not so easy to find unless you have a good amount of money to spare on three or four beds in leading suburbs.

Paid off units in your property portfolio will act as a net base asset and help you and your future with residual income. But to reach that in a reasonable time, you will need to take care of steady growth until you can sell your best performing property that will cover the rest of the small unit loans.

We need to distinguish between good economic areas and new development towns or transformation of cities.

Buying new units in Adelaide, Melbourne, or Brisbane inner-city are likely to reduce in value compared to units in Bondi Junction, the heart of Noosa Head or Barangaroo, for an instant. The primary reason is oversupply and development prices that are too high to correct equity acceleration in the short to medium term. Oversupply also affects the established units in the suburb.

Let’s take a city such as Melbourne, for example. You can drive 15-30 minutes from the CBD to North, East or West and still can see massive construction activities. In addition, with high pre-approvals for the next 1-2 years, oversupply is still very high, which affects the price increase.

So regardless of what you see on the web, promotions, and just median national figures of core logic, be cautious as you can burn.

We have a lot of vacant Lands across Australia and a shortage around every major CBD region. Again, we need to know where to go, but If we catch a single lot of 800m2, we can have the advantage of the land increase. Remember, Land is an appreciated asset, and structure is depreciated asset. When the developer builds 20 units on the same Land size, the land growth is divided by 20, and we also add the Strata cost that reduces the cash flow. Therefore, Land and houses will always have an advantage in capital growth.

For instance, if you look at New York, there is no land available on Manhattan island and the closest suburbs. The majority is buildings, and therefore the demand for buildings and units is high.

Look at London, Paris, Berlin, etc.’, massive megacities with massive demand for apartments for those who like to live in the first few rings. Also, in smaller cities such as Tel Aviv, for instance, although it’s a small city and has houses on the coast and a short drive relatively, the demand for units is still massive. Houses are NOT in the subconscious over there, even for families. But the growth there also has the same principles of supply and demand and good economy of each suburb.

More and more investment companies take advantage of the situation. First, the hot housing market gave them the advantage of encouraging people to buy units as medians rose. Now when the Australian market reaches a pick and prices sort of decline, they are bullish with nonsenses that it’s the units time to explode.

We still have a significant oversupply in most of the CBDs and suburban locations across this country that, no matter what, it’s slowing down the growth. In many spots, we see massive declines that have never gone up even in the past two years of the golden COVID times.

Per Core-logic, which deals with medians statistics and national level, we can take that as it is or twist that data and use it for our sale pitch and false promotions.

“Units recorded a 0.3% rise in values over March, in line with the growth rates recorded in January and February, resulting in a first-quarter appreciation of 0.9%. This is equivalent to a $5,464 increase in median unit values through the quarter. National house values rose 0.8% in March and 2.8% over the three months to March, thanks in part to strong growth in QLD and SA. The rise in house values through the quarter was equivalent to a rise of $21,690 in median values.

While national houses are still recording stronger value growth compared to units, houses have also recorded a faster deceleration in the pace of quarterly growth. Since reaching a cyclical peak in May 2021, the pace of quarterly house growth has recorded a 4.9 percentage point fall, compared to a 3.8 percentage point fall for unit quarterly growth. Similarly, the slowdown in values can be seen in the annual growth trend shown in Figure 1, with both houses and units moving into a downswing trend after recording cyclical peaks in January. 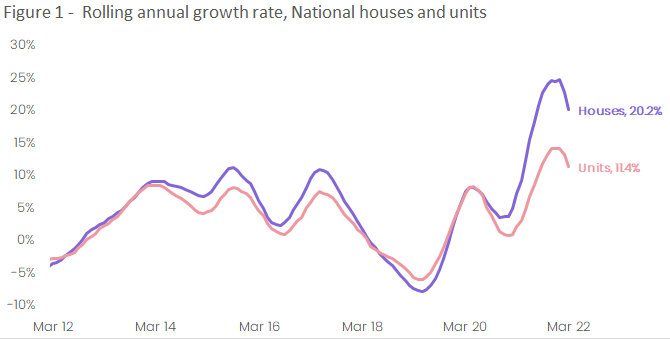 The softer market conditions have not impacted all markets and value segments equally. Over the month of March, growth in houses was 0.5% across the combined capital cities, outperforming units (which were steady over the month). However, combined regional house and unit values both recorded a monthly appreciation of 1.7%. While capital city unit values remained flat over the month, the lower quartile of unit values recorded a modest rise of 0.9%, while the middle and upper segments recorded value changes of 0.2% and -0.5% respectively. Historically, the upper quartile value trend has been more volatile with higher peaks and deeper troughs. “

The best outcome will be to drill down to each suburb representing a different market and property cycle. Then reveal if the preferred asset class is a unit or a house, and check the equity risk.

Please get in touch with us for any questions/feedback or the investinproperties buyers’ advocate service CONTACT US.