Home/Blog/Those who control the real estate end up with Wealth. True or False?
Previous Next 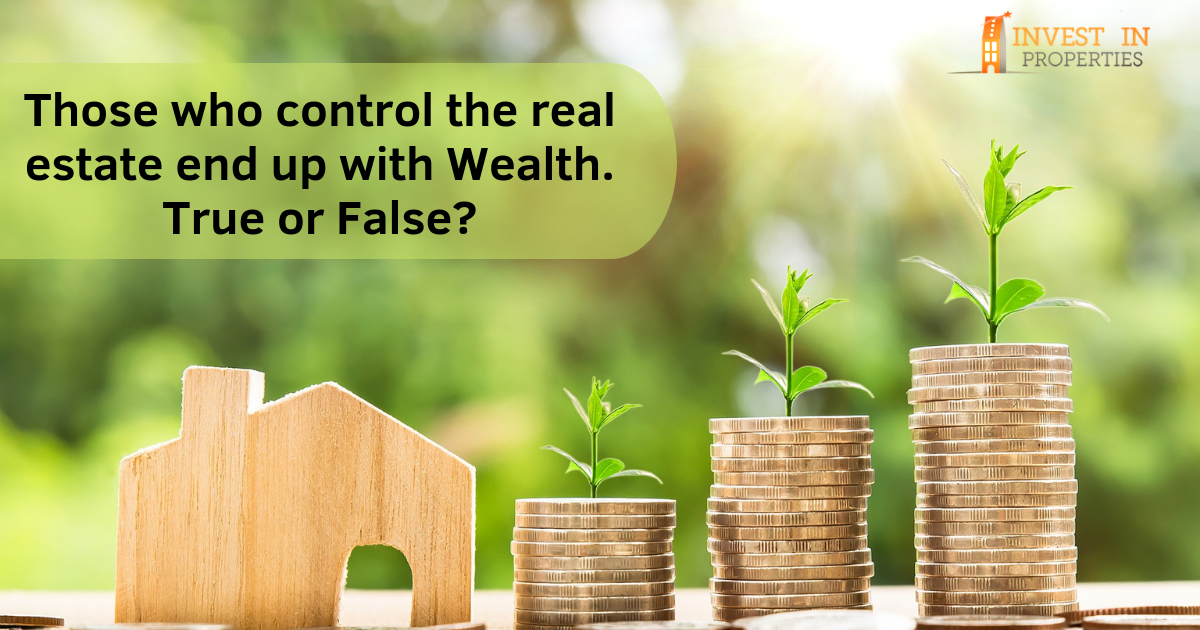 Every one want to create Financial Security. Entrepreneurship world in revolving.

Which, of course, makes Investment too big to ignore. In other words, you have no choice but to participate in them or else you’ll miss out On Creating wealth with doing what you love.

But, how will I know where to Invest my Hard earn Income?

Which ones really end up with wealth?

To answer these questions and more, I polled this, Sit back and Enjoy.

The largest insurance companies in the world invest mainly in commercial real estate and use income-producing real estate to ensure they can pay off the death and retirement benefits of its premium holders.

A. Carnegie, the wealthiest man in the US during the early 20th century, once said: “Ninety per cent of all millionaires become so, through owning real estate “. “More money has been made in real estate than in all industrial investment combined.”

There are many examples of wealth creation through real estate and even the well-known story of McDonald franchise of Ray Kroc, who held a minority position in the company. He figured out if he can control the real estate beneath each franchise branch he could get control of the company, and that’s what happens. McDonald founder surrendered the worldwide franchise ownership over to Ray K, who build the most extensive food chain business in the world.

Arnold Schwarzenegger now worth $300 million, he did not make his first money as a weightlifter or actor. In 1970 he was using all his surplus cash to invest in buying in real estate. After a while, his assets produced income that allowed Arnold to create his financial freedom so he can focus on his fantastic career as an actor and finally as a governor of California.

Even during the GFC 2007-2008, the most severe real estate blast since the Great Depression, those who invest in real estate didn’t regret later on life. They didn’t like it, but they knew it will pass one day. Even sometimes, when you buy at the top of the market, those investments would be worth more today than they were when you bought them.

Apparently, the best investment on earth is earth and for the long run, whatever happened now, with politics, economy, corruption, weather, at the end of the line your real estate portfolio will survive and will be worth much more.

Well, it’s all great, and people should remember that real estate is a great vehicle to build Wealth; however, you also need to know what to buy.

A lot of investment companies use this long term approach and wealth stories and claim that whatever you buy now, over the long term, you will do great.  This is not a lie; however, you can do 10 times better if you know what you buy. This approach allows them to sell an inferior product that you will struggle for a long time until you see significant results, which obviously you will miss the first 10-15 year or more for generating good Wealth.

The principal is to buy in the right economic spots, an excellent location which the suburb is in-demand that can gulp the supply. Suburbs and asset classes that their growth potential is substantial, it means at least 3-4% every year with at least a major steady pick on the upturn of the suburb cycle.  Giving up even 2% every year, especially in oversupplies areas will take out from your Wealth multi-millions of dollars. That won’t be smart if you won’t gain any over 12 years cycle and this is the situation today in many areas in Sydney, Melbourne, Brisbane, Perth, Adelaide and Tasmania.

Understanding the property risk and return will prevent you from making mistakes. This was tested, and we achieve outstanding results with our existing followers’ investors.   Yes, Wealth can be created over a long time with Real estate, however, buying the wrong assets, in the beginning, will jeopardize your ability to buy more and reach after 10-12 years to exceptional Wealth and in 20 year time to massive Wealth that you can pursue your financial freedom.

If you get a bit creative and follow this, you can spike your Wealth.

So, which Investment End up with wealth to you?