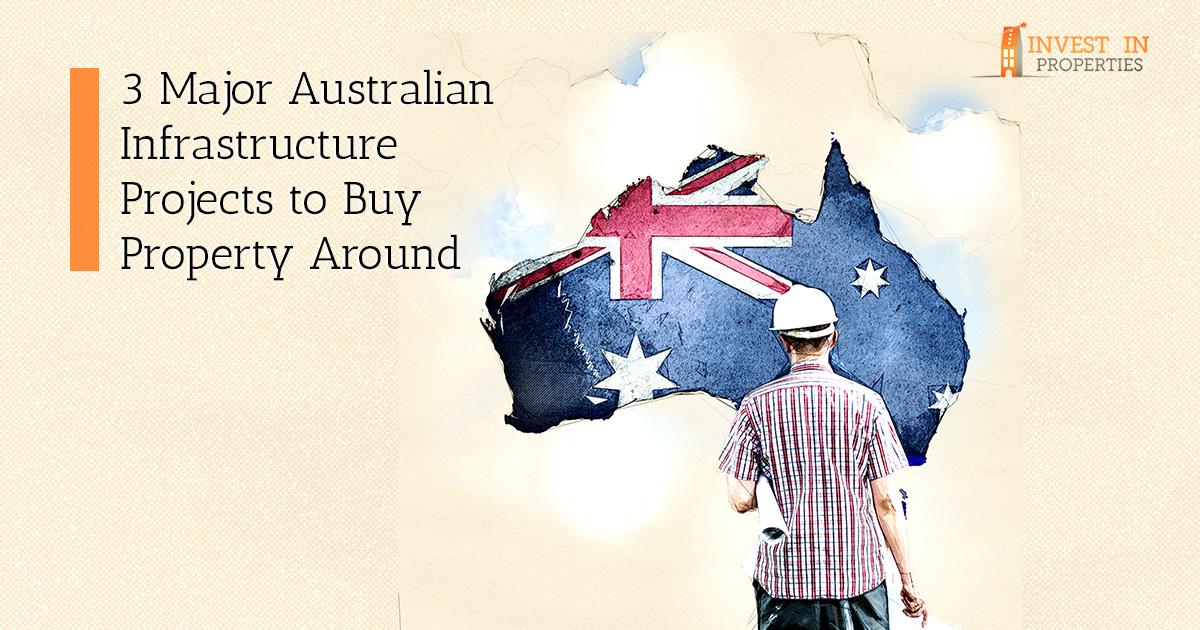 Growth in the Australian property market has slowed in the last two years as compared to the preceding decade.

While little could go wrong by investing in property, no matter where your property was located, the situation has changed in recent times. A lot has to be weighed.

You’re more likely to make money by considering locations which will see exponential growth in coming years. Most of the markets are not as predictable as they were back then.

Also, more importantly, you have to know how you can get in early to maximize the potential for growth.

“Infrastructure development is the most powerful creator of capital growth in real estate,’’ says one property analyst. Usually, the most influential projects are transport infrastructure.

If you follow the three Rs of real estate—Road, Rail links and River crossings—you can know where growth is going next.

Using that criterion, I have cited 3 major property growth infrastructure projects in Australia that are likely to cause an improvement in the appeal of the property in their location.

Stage 2 of Sydney Metro is slated to extend metro rail from the North West region of Sydney to Bankstown. It comes with seven new modern metro stations, some in areas with burgeoning real estate markets such as Waterloo.

The train will increase accessibility to Sydney. It will be able to move large numbers of people to and from the city. This will translate into an increase in the population density of the area, thus more renters.

Construction will begin in 2017. This gives you—the property investor—enough time to position yourself in order to benefit from this transformation.

Areas that will benefit from this project include: Crows Nest, Victoria Cross, Barangaroo, Martin Place, Pitt Street, Waterloo and the entire north west node which include Marsden Park and Rose hill.

Australia TradeCoast has been billed as Australia’s fastest growing trade and industrial region. Situated a few kilometres from the Brisbane CBD, the region boosts direct links to the Brisbane Airport, the Port of Brisbane, as well as road and rail networks.

The sprouting world-class infrastructure and expected growth on offer in the region begs an important question in the minds of all property investors: How is this going to affect Brisbane’s property market?

I can tell you one thing. The only way is up from here. Brisbane’s property market is already feeling the flow of people. Quoting from Brisbane Times, “South-east Queensland must find 700,000 homes for an extra 1.4 million people within 15 years, Australia’s pre-eminent infrastructure body says.” Meanwhile the median house price of Brisbane hit $635,000 over the June quarter; its record highest.

The prospects for growth in the area are good for the coming years. The local economy should continue to grow due to the building boom throughout the Australia TradeCoast.

The Regional Rail Link runs through Melbourne, Victoria. It is yet to see significant growth since its completion in 2015, but all indications suggest that it’s coming.

The multi-billion dollar link is one of those projects people needed to see and feel in order to appreciate their impact. That time has passed. The link is now fully functional.

One of its biggest impacts has been the elimination of capacity problems.

The link provides access through the western suburbs of Melbourne, with exclusive tracks for the Bendigo, Ballarat, and Geelong trains. This, as well, is a big plus to what used to be lowdown settlement.

Apart from that, the city already has a lot to offer through its affordable lifestyle and great business district. This link has only unlocked potential in its real estate that very few could foresee.

My expectations are that in the next 1-2 years, we are going to see home prices reveling in this potential.

If you want to buy property in Australia while looking to the future, my advice is to inspect the infrastructure trail that the Government has mapped. The areas around property growth infrastructure projects are projected to grow notably in the next three or four years.